We set off from our hotel with a gift of fresh bread in our packs to accompany tomatoes, cucumber and cheese.  Very nice as this saved us seeking a bakery open at 7am. That was our start time today as we wanted to get some kilometres under our boots before the heat of the day became too unbearable. The walk out of town was quick, soon we were climbing into the hills and climbing up a steep scree path. It was hard going but at the top – ah – bliss – stunning scenery. From this height, the city behind us sparkled in the sun, we couldn’t see the garbage in the river so it looked like a pretty silver ribbon laying across green patchwork fields. The houses had become small toy buildings with attractive red tile roves. We could no longer distiguish the unfinished ramble-sham of cement pillars, unfinished walls, and broken rusty fences. The walk along the ridge through pine forest and scrub land was made comfortable by a cooling breeze and then – joy of joy some cloud began to cover the sky. It was such a relief to feel the temperaturedrop into the high 20s! We had our picnic in the nicest place yet up on that ridge looking back the way we had come and forward to where we were going. We defended again into the river valley to find the suspension bridge we were to cross torn apart and being reconstructed. Thankfully there was an alternate small detour. Very shortly afterwards the walk for today ended.

It ended in a village with no accommodation.mWe knew that so were prepared today and set off up a very busy highway to a hotel I thought was the one described in our guide book. The guide book just said “hotel up the road in 900 meters.” Well there was one – very glass and posh. But I’d booked us into a different one thinking it was this one…. Did you follow that? So we had a cold beer then set off up the highway some more. Not pleasant walking.  The highway ran beside the railway track. The railway went into a tunnel and yes we could see light at the other end. This would be quicker and easier than dealing with the crazy fast drivers on a highway with little dodging room. Pat had her head lamp handy so we walked through the tunnel. No trains came we are glad to say. When we came out the other side we were close to the village. We asked where the hotel was and were sent down into and through this village. It all seemed very odd. Everyone sent us in the same direction – to an old Roman bridge. By the way, the word for hotel in Albanian is hotel. Where the bridge idea came from we don’t know. We’re tourists, it’s a tourist spot….. So we walked back up to the highway and continued along it again. There was a car parked and a man getting into it. We called out to him and very soon he’d found out where the hotel really was and drove us there. This fine man is Albania’s only Olympic skier. He’s been in the last three Winter Olympics. How cool is that? Anyway we invited him fora beer and he sorted out some onfusions at the hotel. We arrived a day early you see….. So we are now,four for four. We’ve ended every walking day with a surprise addressed by kind strangers.

We’ve now had dinner – old sheep under the overly optimistic menu name of lamb! But the salad was excellent.

Despite the end of our walk being a bit anxiety provoking as we trudged tired through a rail tunnel, along a highway, and to and old bridge – we’ve had a great day. And wonder of wonders – it rained this evening! Should be cooler for the next week. We hope to continue to be pleased with this turn of events. 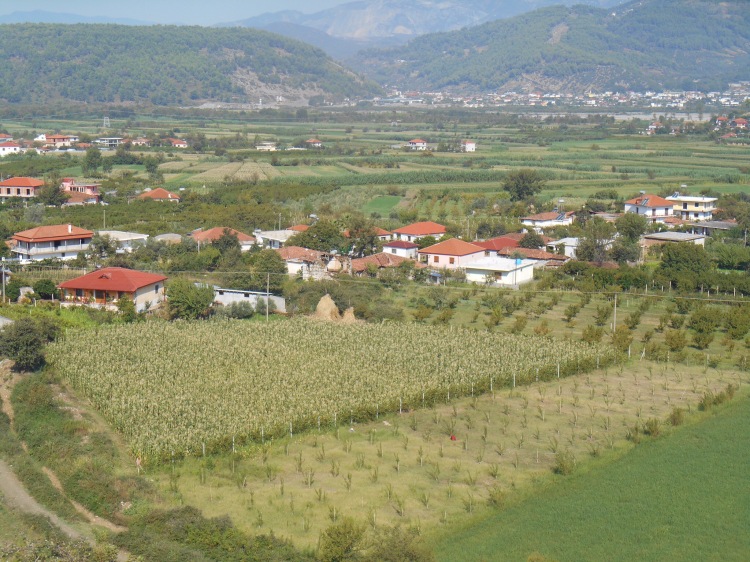 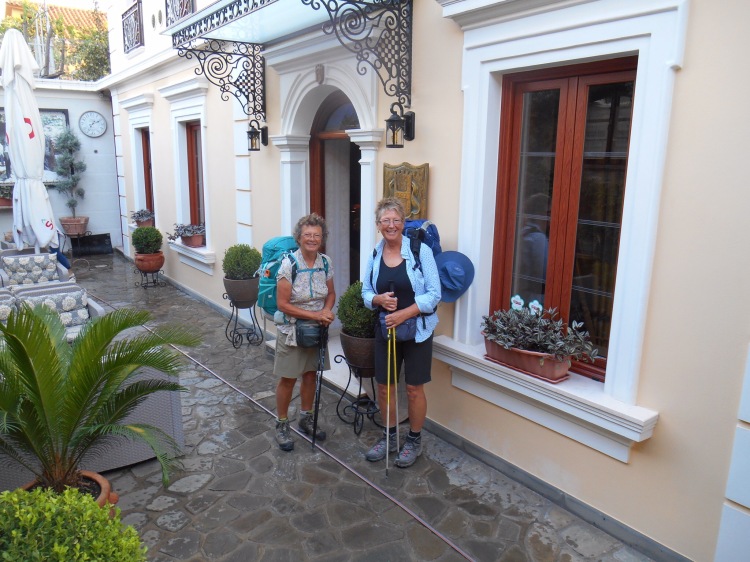 Pictures – First is Pat and our Olympian rescuer. Last is us starting out this morning from our hotel in Elbasan. Others are along today’s picturesque route.