You may remember that our first visit to Dubrovnik was on a cool damp day. Not so this time round. The sun shone, the sky a brilliant blue, the temperatures pleasantly warm!

Dad and I took one of the “pay extra for” optional excursions as we’d already taken the included excursion on our first stop in Dubrovnik. This turned out to be an excellent choice. There were just ten of us, so a van rather than a bus. Our first stop was at two mills. The first grinds corn into flour, the second “felts” loosely hand woven fabric into thicker weather proof versions suitable for outer wear. Both mills were fully functioning until the mid 1960’s. Today they are used for artisan breads and fabrics but mostly as a tourist attraction. We were met by the owner who showed us the workings – which was very interesting.  There was also a woman there dressed in her traditional clothes who served us some fine local brandy and sugared orange and lemon rinds – also produced locally.  A pleasant forest walk beside the rushing stream, the whole thing was a welcome change from being paraded around towns and cities following the Viking cruise guide lollipop.

Our second stop was at a silk shop. The woman there invited us up to her living room where she served delicious home made almond cake and tea. Then she explained silk manufacturing as a sustainable and organic cottage industry. Fascinating. We even got to pet the silk worms – caterpillars really. Cute little creatures. So busy munching their mulberry leaves. We watched our host wind a spool of silk from the cocoons, heard about the traditions of the embroidery of the area. One strand of silk is about 1 kilometre long. The silk was a lovely yellow colour. This woman too was dressed in her traditional clothing and she gave a lively demonstration of its inner workings. Reminiscent of getting into and out of a Sherpa dress. Several similarities. Besides the complexities of getting into these garments, An other similarly is that maidens don’t wear aprons, married women do.

Back in Dubrovnik town, dad and I proceeded to walk around the top of the town wall. Nu,Eros steps. Dad went to the half way point and called it quits. He went down and back to the main gate at street level. I continued around and up into the main tower and met up with him at the town well. We then found a pharmacy as dads cold is getting quite severe.

Back to the ship via the frequent shuttle busses laid on by Viking. Just getting dark as we arrived. A perfect day!  We attended an excellent enrichment lecture about the Greek economic crisis, went to dinner and were blissfully in bed by about 10pm – early! 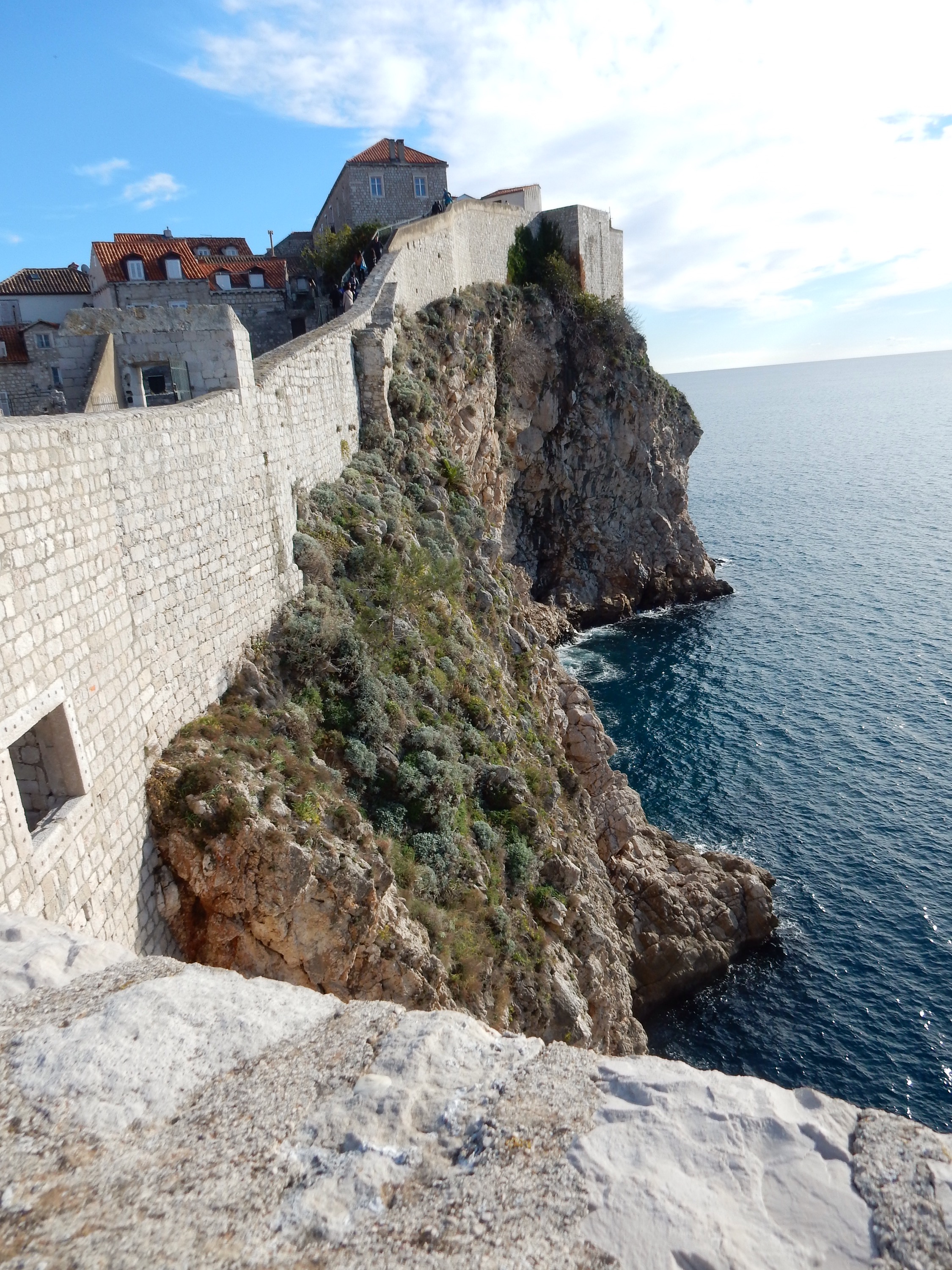 Up on the wall. Surrounding Dubrovnik 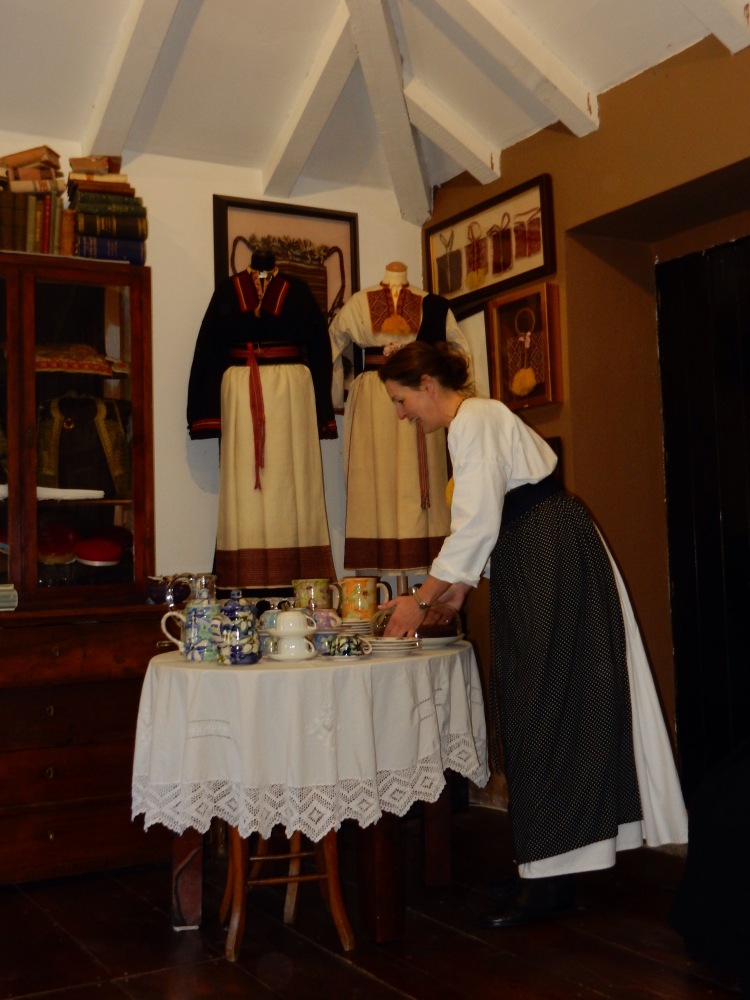 Tea and cake at the silk worm lady’s home. 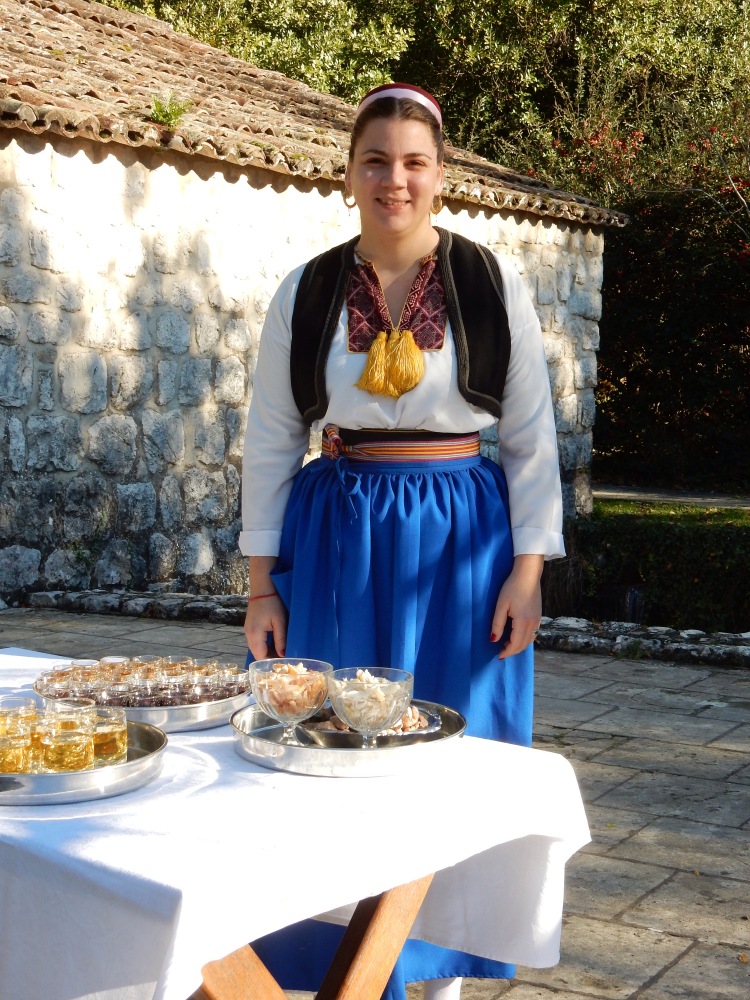 Treats at the mill