Most of you will remember that I came here with my mum in 2004 when we were on our great Eastern European adventure. I was a bit worried that coming back as a cruise ship passenger would not be a particularly enjoyable experience. I was wrong.

Dad and I were booked for one of the first tenders ashore. Viking Star is the only cruise ship in harbour. It’s the end of the season so there are very few other tourists. Thus nothing was overly crowded. The temperature was perfect too. Once on shore, we took a bus to the two villages of major interst and had ample free time to wander around at our leisure.

When we were ready, we caught the cable-car back down to port and hopped on a tender back to the ship. …. Where we enjoyed a cold beer while looking across the sparkling blue water up at the pretty cake icing villages. They perch upon, and seemingly flow down, the steep volcanic cliffs above the coldera in which we float.

Getting on and off the tenders is a slick procedure. They just pull up along-side. The sea level door on our ship is opened and crew members hand everyone across the gap. They have to work a little harder with some of the larger and less mobile passengers than others – but I think everyone who wanted to go ashore was maneuvered off the mother ship….(And presumably they’ve been hauled back on again!)

I’ve just returned to our cabin after spending a blissful hour of reading on the sun deck! Life is tough out here on the high seas.

Here’s an anecdote for you. The Viking shore office was completely incapable of accepting that dad and I don’t live together, aren’t married, have separate credit cards etc. As a result of their outstanding incompetence, we had a king size bed when we arrived. Our cabin staff sorted that mess out very quickly and were apologetic. Our on board notices and shore excursions were addressed for Mr and Mrs Letson. We explained that Mrs Letson died a couple of years ago and that we are father and daughter. Yes yes they understood etc and it would be rectified. Then we got some correspondence – and surprise surprise it was addressed to Mr and Mrs Letson. So I popped down to the appropriate office and explained again – I am not Mrs. Letson. More promises that the situation would be fixed. This time it was – it would appear so any way. We also had the most lovely bouquet of fresh flowers delivered to our cabin – with an appropriately addressed card of apology. All this nonsence because of the poor quality of the pre cruise administration.  Both dad and I are highly impressed with the level of service on the boat! While I write this, he is busy considering our next cruise!

The crew members are interesting to talk to. They are from numerous countries. We’ve met quite a few from Macedonia. When I tell them I’ll be there next year, they enthusiastically tell me how pretty their home country is and provide all sorts of information. A young man we talked to today is from Malasia – he’s been on board for nine months…. Making money to support his wife and two children. This type of story is very common.

Here’s a few pictures of Santorini. 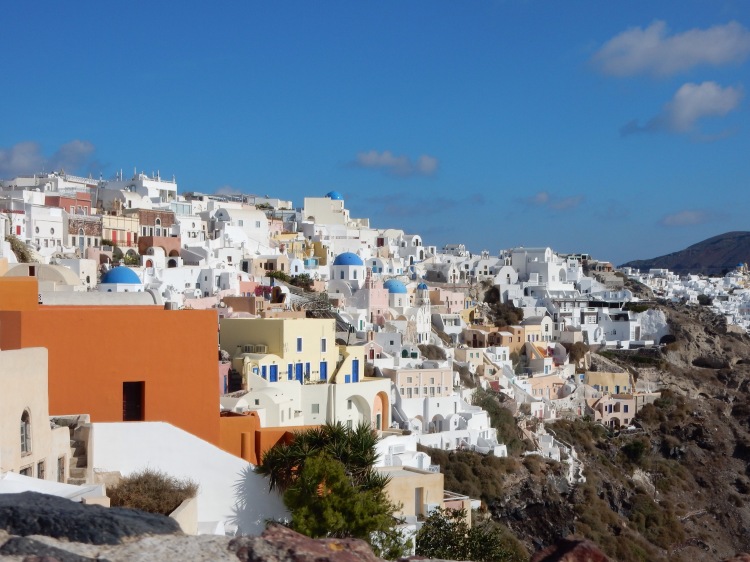 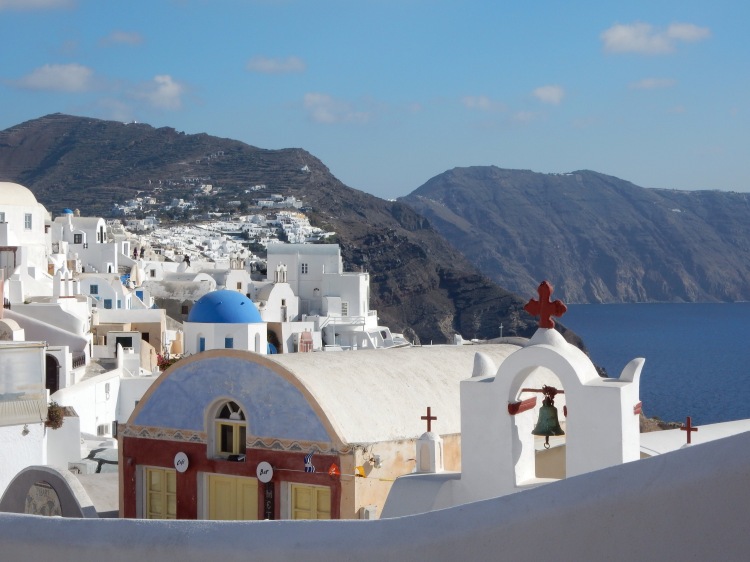 Isn’t that simply lovely. I’ll try to send a couple more but Internet is a tad odd…..even slower than in Nepal.