Ephesus. One of the ancient wonders of the world!

But first – we woke on the Agean Sea under sunny skies. And even while at sea it was warm enough for our cabin door to be open. Short sleeves and skirt weather! Our morning was occupied with the second of a series of lectures about modern Turkey, the global impact of the failed Arab Spring, ISIS, refugees and various other issues plaguing this part of the world. An excellent presentation which invites thoughtful consideration of the complexities.

Soon we were pulling into port. A very neat clean city – Kusadasi. Within a few minutes the first busses were being loaded and we headed off on a short drive to the ancient site of Ephesus. Although it is now inland, during Roman times it was a flurishing port city of about 25,000 inhabitants. On one of the Silk Road trade routes, Ephesus was an important centre of trade, and served as a regional Capital for the empire. The ruins excavated to date comprise about 20% of the total, and we saw a fairly small portion of that. What we did see were the marble remains of a once beautiful city. The edifice of the library has been restored to provide an idea of the grandeur of the public buildings. The gymnasium amphitheater is still easily recognizable as that. Walking along the more that 2000 year old marble paved roads and imagining the shops, homes and public baths was a rare treat! We left feeling we’d had a glimpse into times long past.

On the way back to the boat we stopped to learn about the  manufacturing of Turkish carpets. You all know what that means. 15 minutes of “this is how we make the carpets” followed by the sales pitch. Having already experienced both in Instanbul I realized a potential bargain could be made. And so – with glee – got down to business. My lovely – tiny – carpet will arrive in about 10 weeks. Wait until you see the myriad of colours!

Back on the boat we barely had time for a before dinner drink in our cabin before heading off for another wonderful dinning experience. We met yet another very pleasant couple. Then off the the theatre for an amusing evening of musical entertainment – a brilliant blend of opera and rock, done as a comedic musical. Clever. All “borrowed” scores from much loved and well known operas and popular tunes.

Now exhausted and in bed. Meanwhile our ship sails toward Pireaeus (just south of Athens) Greece. Tomorrow more touring, another lecture, and a Beatles concert. What the Beatles have to do with Athens escapes me but – whatever. Have to say – we are having a great time!  Who knew? 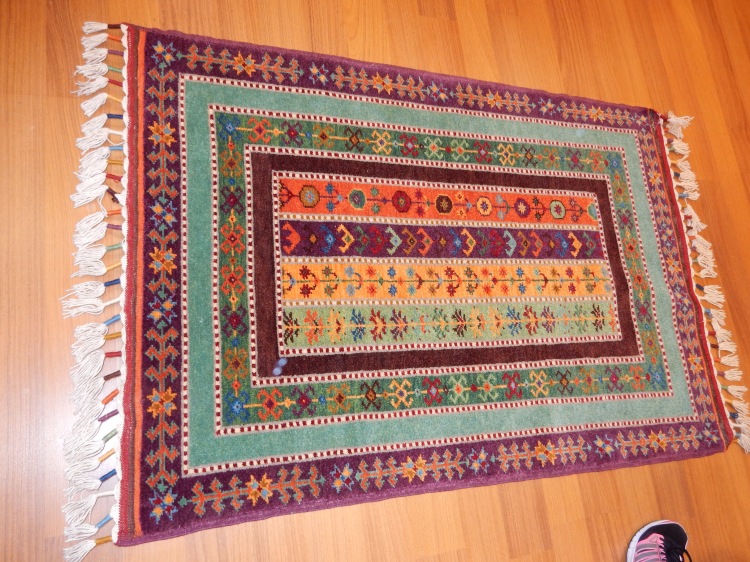 Above – My new Turkish carpet.. Natasha will love it!

Below – the library at Ephesus.

Dad enjoying breakfast on the aft deck ant 8 am this morning.

12 thoughts on “Ephesus and the opera”