Despite the somewhat grungy surroundings Karin and I slept well on our hard beds. We coped with the lack of running water, brushing our teeth with our cups of drinking water and practicing far reaching spits onto a roof next door. We didn’t want to drop toothpaste blobs onto the person preparing food immediately below us! We were on the road shortly after 7am and the first section, while steep, continued to be properly designed and mostly complete. About an hour before Khamding we turned off the main road and proceeded down a very rutted bumpy track. Tendi told us it’s simply impassible during the monsoons. So we leaped along at a pace little faster than walking. A couple of times we exited so there’d be less weight and walked up particularly steep bits hopping back in at the top of rises.

The scenery is phenomenal. We are quite high by now at 2500 metres and the slopes above and below and all around are terraced with tiny rice, corn and wheat fields. The higher we climb the more of the harvest has been completed. Simple farm houses scatter the landscape. We are on the only “road”, everywhere else is linked by path ways.

Finally we come to a final section of road where we need to vacate the jeep but this time we take an even steeper short cut up a bank. There are a few houses perched above us. We have arrived in Khamding on foot! It’s a very small village – a cluster of houses. 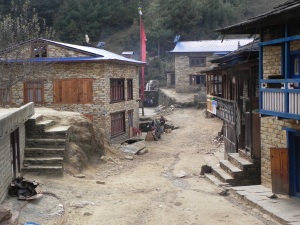 The Main Street of Khamding

We are ushered into Pembachhiri’s home. This is Tendi’s younger brother. We have the first of many many cups of tea. Getting it without sugar is a challenge which we fail to surmount on several occasions during the next four days! The jeep arrives and our assorted cargo is sorted out. We’ve arrived laden with gifts. The pile includes two drums and a tambourine for the school. An enormous blue barrel of food items for our meals. It turns out that Tendi has also brought western style plastic plates and bowls as he thinks Karin and I won’t want to eat from the traditional brass plates used here. There are also numerous gifts for his wife, Lhamu, and his parents.

After about three teas we don our packs and packages and proceed out of the village down some stone steps, through the school yard and along a series of narrow paths at the edges of terraced fields to Tendi’s home. His home is typical of the farm houses in the area.

Karin and I occupy ourselves outside for a bit talking to the dogs, the cows and chickens to give Tendi a few private moments with Lhamu. Then in we go. The ground floor is an entry way and the newly installed indoor toilet. This latest feature is in our honour. How many of you have had potential hosts install a bathroom because you are visiting their home? Beyond that is a massive cold storage room. It is pretty full of potatoes.

We head up the wooden steps into the kitchen.

Through a curtained door way and we’re in the main room of the house. Here we meet Lhamu. She is clearly shy at having us but that soon resolves into smiles and as the visit progresses we become fast friends. Karin and Lhamu, in particular, establish a bond that conquers any cultural or language differences. She has made up cozy inviting beds for us in two corners of this room. We unpack into our respective corners and are served – more tea! Then lunch which we eat alone in the dining room while our cook (one of Tendi’s many cousins), Lhamu and Tendi eat simpler fare in the smoky kitchen. It turns out that is the last meal we eat in such solitary splendour. For the rest we happily join the family in the kitchen which really isn’t that smoky.

After lunch Karin and I explore the next door farm and meet the goats. Needless to say we run amuck in picture taking bliss. To give Tendi and Lhamu a bit of together time< Karin and I head off up to the village. we walk a short bit up the track in one direction and down it in another. The day has grown cool and cloudy so we head back to the farm and have a moment’s doubt as to which of the several trails we should follow. How funn if we should get ourselves misplaced. As it happens we are on the right track and end up safe and sound at the farm in time for a delicious meal! This includes some of the mysterious beverage everyone’s been drinking. Local Roxy! Lhamu has distilled her version from apples. She shows us an enormous vat of the stuff currently fermenting in the first stage of the process. The next stage will be the distillation. The drink is clear, yellow strong and very smooth! It’s quite a fine beverage. Karin has a couple to my one! I seem to recall some beer consumption at lunch as well as later in the day but it has all become a bit of a blur. Sherpa hospitality dictates many repeated offerings and “No thank yous” are ignored.

Every one turns in at about 7:30. Us to our corners, Tendi and Lhamu to a little cubical he’s built in another corner of the room.