11 October. For reasons that remain a mystery to me we took a private vehicle from Kathmandu to Pokhara instead of the bus. Much more comfortable and quicker. Despite having made this trip several times now, the experience remains exiting. The roads are so dreadful and there are so many vehicles and the general driving habits are so peculiar from my western point of view.  Drivers pass slower vehicles on blind corners simply sounding the horn to warn oncoming traffic that there is a vehicle in the “wrong” lane.  On coming traffic in its correct lane just swerves or slows and everyone  passes each other with bare inches to spare. its a mystery to me how it all works but it seems to.  The level of  driving skill is phenominal. Once safely in Pokhara, we stayed the night at Lake Side Resort which is quite a bit more up scale than my usual Nepal lodgings and the price turned out to be rather more upscale as well. Having a hot water bath was pretty nice and I’m really looking forward to a repeat performance after this trek. I did get good value for my room I must admit as I fell asleep at about 6:30 and slept 12 hours!! Jet lag finally caught up with me. I was probably sleeping off the long days of strenuous touristing in New York and Washington DC as well!!

12 October. We headed off in our jeep just after 8am and at 4pm we arrived in Kalopani. While the first several kilometres were reasonably paved – then less than reasonably paved but relatively even – although increasingly narrow – things soon deteriorated. The road became more of a deeply rutted track. To my complete amazement busses were driving on this horrendously narrow, steep, windy, bumpy, at times washed-out thoroughfare. This was driving suitable only for jeeps and high clearance four wheel drive vehicles surely? But this is Nepal so just about any vehicle is expected to go just about anywhere.

We got stuck once. A stream had washed road-fill away from very rough uneven bed rock. The bed rock had no intention of being remotely road like. There were several people about, so pretty soon boulders and smaller rocks were being placed into the three foot deep ravine transecting the road and we were soon on our way again. No one seemed slightly concerned – all just a normal day’s drive. We were

Sunset on Annapurna I -it’s for moments like this that I come here.

all happy to finally arrive in Kalopani! Dinner and a good night’s sleep are in order. The trekking begins in the morning.

13 October. The first day of trekking is over. We’re in Marpha staying at the same guest house we stopped at last year while completing the Annapurna Circuit. Walking the route backwards provides such different views there were some bits I didn’t even recognize, so for the most part it felt new and wonderful. We had to follow the road for some stretches but there really isn’t that much traffic. What does go by kicks up a massive amount of dust which isn’t that pleasant but there’s enough path-way off the road to keep the walk enjoyable. Today’s walk was about five hours plus a long lazy lunch stop. Tendi’s breaking me in to the ordeal ahead gradually. We were in and washed by just after 2pm, so I’m now enjoying an afternoon of reading, blogging and tea sipping.

The coutryside is so pretty. Today’s walk followed this river and we continue along it all day tomorrow, and I think the next day as well. 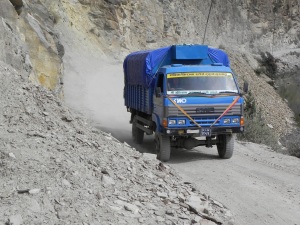 This is what I mean about the trafic kicking up dust! As you can see these trucks are quite small and have good road clearance!

9 thoughts on “The Trek Begins”